Oops, there was a problem with your submission

One or more pieces of information caused an error. Please see below for problems and correct information where necessary.

Why teach a language to preschoolers?

This is a guest post from Debbie Garrick, founder of Muchachos Singing Spanish & C'est Chouette Singing French who teach language to preschoolers across Sussex and beyond.

'Why teach a language to pre-schoolers?'

'The benefits of learning at a young age have been widely documented, from increasing creativity and problem solving abilities to giving children confidence and a better knowledge of the world. What is more young children's brains are naturally geared towards language learning as language acquisition is a huge part of their growth, particularly around age 2-3, but right up to 7 years old. This makes it easy for children to pick up new words and pronunciation, they are like little sponges. That said, I think we often forget just how useful speaking a foreign language can be, it doesn't matter whether you only use it on a family holiday - it’s still the best way to get a bargain at the local market or find a hidden treasure off the beaten track. 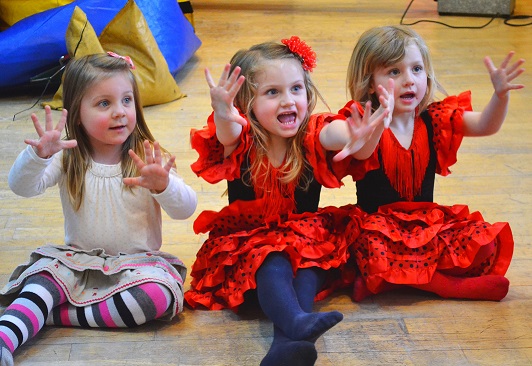 Teaching languages to pre-schoolers gives them a life long skill

Despite English being an important world language, being able to communicate with others in their own tongue will always get you further. HSBC sell themselves on this, local knowledge, sports stars and singers have international careers where a few words can go a long way and thousands of companies value languages when looking at recruitment. As a country we are looking at a language deficit and the government has serious concerns about our ability to perform on the world stage of trade in the future. Organisations like Speak to the Future hope to encourage people into language learning and their latest campaign is aimed at everyone being able to learn 1000 words. So there you have it, teaching languages to pre-schoolers gives them a head start with a skill they will use for the rest of their lives.

The emphasis is on having fun

Muchachos Singing Spanish & C'est Chouette Singing French teach language to children aged 20 months upwards through song, dance and games. The emphasis is on having fun with the language and developing the confidence to speak. Debbie Garrick the founder of the classes studied languages for many years and has lived and taught in several countries. She is a member of the Chartered Institute of Linguists, and has a passion for inspiring language learning.'

If you would like to blog, please contact the team. The theme can be children, families, sports, music, dance, theatre, photography, cakes, health.....anything really!

Would you like to know about all KalliKids blogs as they are posted?

KalliKids is GLAM Website design and web development by